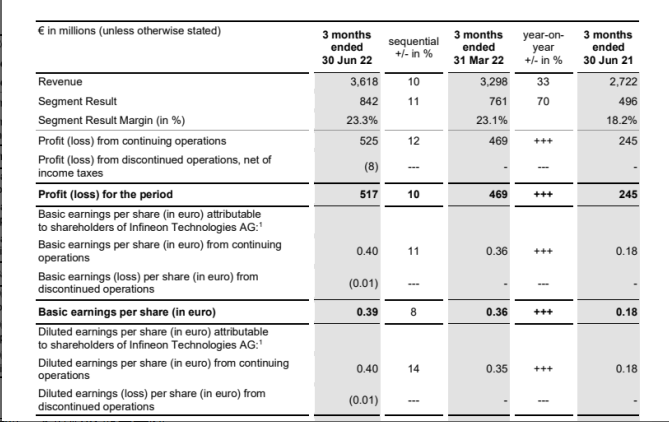 Infineon said its revenue for the quarter increased by 10% quarter-on-quarter to 3.618 billion euros, with significant growth in the automotive (ATV) and power supply and sensor systems (PSS) sectors, industrial power control (IPC) and Revenues in the Connected Security Systems (CSS) segment increased slightly.

Among them, ATV's revenue increased to 1.701 billion euros from 1.491 billion euros in the first three months. All products and application areas, especially microcontrollers, contributed to a substantial 14% increase in revenue. The increase in revenue was due in part to increased production due to increased available manufacturing capacity and in part to favorable pricing and currency effects.

Jochen Hanebeck, CEO of Inlink, said that in a difficult macroeconomic environment, Inlink continued to maintain good momentum with its differentiated product portfolio.

Hanebeck also noted that rising energy costs/feedstock prices and interest rates, the pandemic and ongoing geopolitical uncertainty are all holding back current economic growth. In addition, some consumer-oriented end markets, which have seen weaker demand recently, are closely monitoring market developments and are prepared to act swiftly if necessary.

It also said that structural drivers such as decarbonization and digitization continue to drive up chip demand, the global trend of electrified mobility continues, and many countries are seeking to ensure independent energy supplies, which will further accelerate the expansion of renewable energy.

In the end, he also said that Infineon has also benefited from continued high-water investments in communications infrastructure, data centers and cloud computing.