Home > Blogs > The European Union introduced the "Chip Act", hoping to compete with the United States

The European Union introduced the "Chip Act", hoping to compete with the United States

Recently, the European Commission announced a new chip manufacturing "ecosystem" plan to maintain the EU's competitiveness and self-sufficiency after global semiconductor shortages indicate the danger of relying on Asian and American suppliers.

"Digital projects are a matter of success or failure," said Ursula Vonderlein, President of the European Commission, in a policy speech at the European Parliament in Strasbourg.

"We will propose a new European chip bill. The purpose is to jointly create a most advanced European chip ecosystem, including production. This ensures the security of our supply and will develop new markets for breakthrough European technologies."

The semiconductor shortage is one of the biggest risks for the EU to rebound from the impact of the COVID-19 pandemic. The committee announced plans to invest one-fifth of its 750 billion euro COVID-19 recovery fund in digital projects last year.

Von der Lein regretted the EU's dependence on Asian-made chips and its reduced share in the supply chain from design to manufacturing capabilities.

However, obstacles to establishing European chip capabilities include access to rare earth minerals outside the EU, and companies’ reluctance to make huge investments unless they can run these factories at full capacity to increase returns.

"We need to link our world-class research design and testing capabilities. We need to coordinate European level and national investment," Von der Lein said. "The goal is to jointly create a state-of-the-art ecosystem,"

Faced with a global chip shortage and heavy dependence on Taiwan and the United States, Europe hopes to increase its share of the global chip market to 20% by 2030.

U.S. legislators introduced the "American Chip Act" last year, injecting tens of billions of dollars into the industry. Other countries are also investing heavily in this technology.

European countries are developing an investment plan called IPCEI, and the committee is cooperating with companies to establish industry alliances. But European industry has urged policymakers to speed up their investment plans, saying that continental Europe may miss this booming key industry.

Von Delane said that the development of the chip industry in Europe is "not just a question of our competitiveness. It is also a question of technological sovereignty." 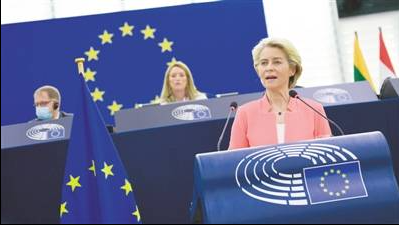