Infineon Technologies AG recently announced that its 300mm thin wafer power semiconductor chip factory in Villach, Austria, has officially started operations. With a total investment of 1.6 billion Euros, this chip factory with the motto "Facing the Future" is one of the largest projects of its kind in the European microelectronics field and one of the most modern semiconductor device factories. European Commissioner Thierry Breton, Austrian Prime Minister Sebastian Kurz, Infineon Technologies CEO Dr. Reinhard Ploss, and Infineon Technologies Austria CEO Dr. Sabine Herlitschka attended the opening ceremony of the new factory. 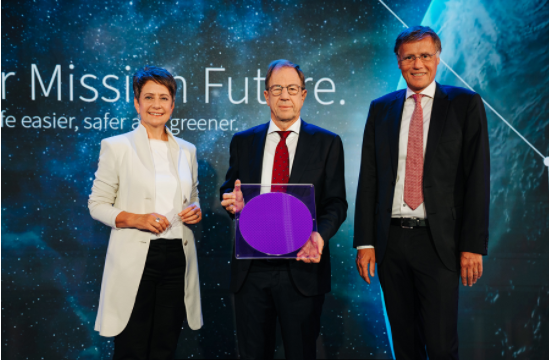 Focusing on achieving long-term profitable growth through efficiency enhancement and emission reduction, Infineon announced a new chip factory as early as 2018 to produce power semiconductor devices (energy-efficient chips). Dr. Reinhard Ploss, CEO of Infineon, said: “The new factory is another important milestone in the history of Infineon’s development, and its start-up operation is also great news for our customers. As the global demand for power semiconductor devices continues to grow Now is the best time to increase production capacity. The market situation in the past few months has clearly shown that microelectronics technology is very important and covers almost all areas of life. With the acceleration of digitalization and electrification, we expect In the next few years, the global demand for power semiconductor devices will continue to grow. The new capacity will help us better provide long-term quality services to global customers."

In 2021, with the repeated occurrence of chip shortages, especially the rapid growth of related chip markets such as automobiles, major semiconductor companies have significantly increased their capital investment in order to accelerate the expansion of production capacity. These include Bosch’s 300mm wafer fab in Dresden, which was put into production in Dresden. ON Semiconductor acquired GlobalFoundries’ New York plant in 2019. CEO Hassane also said in an interview with the media not long ago that the company wants to focus on the fab. Transfer to 300mm, and gradually withdraw from 200mm and other backward fabs. STMicroelectronics and Tower Semiconductor also announced an agreement to jointly accelerate the commissioning of the Italian Agrate R3300mm wafer fab and is expected to start production in the second half of 2022. TI acquired Micron's fab in Utah this year.

The situation of the global chip market shows that investing in innovative technologies is very important for future development. In today's world, microelectronics technology is a key technology that occupies a dominant position, and related research and development, systems and technologies in the digital field are based on this. In the industry, Infineon's capacity expansion is a milestone in maintaining the stability of the global supply chain.

However, Infineon also said that major global manufacturers are currently undergoing radical capacity expansion, and semiconductor supply may reach a peak in 2023 and 2024. But the most important thing is to determine the form of demand and which areas of chip demand will continue to grow, which requires flexible capacity allocation. Especially in response to the dynamic needs of automakers, Infineon’s 300mm wafer fab can meet changes in the automotive industry with a more economical scale effect.

"We need to switch a way of thinking. We need to coordinate production together on the basis of building consensus with partners and customers, so that we can be more flexible. We have also learned a lesson during the new crown epidemic, and we need to be smart in the future. The inventory handling method." CEO Dr. Reinhard Ploss said.

But Infineon also emphasized that “it is not a new factory being built, and there is no problem with the semiconductor supply chain at present.”

The first products have been shipped

After three years of preparation and construction, the new plant was put into operation in early August, three months ahead of the original plan. In the first stage of capacity expansion, the chips produced will be mainly used to meet the needs of the automotive industry, data centers, and renewable energy power generation fields such as solar and wind energy. At the company's overall level, the new plant is expected to bring about 2 billion euros in annual sales growth for Infineon. At present, Infineon expects sales of 11 billion euros in 2021, which is equivalent to a direct increase in annual sales of about 20%. .

The semiconductors produced at the Villach plant will be used in a variety of applications. Therefore, the new plant will enable Infineon to serve the ever-increasing market demand for power semiconductors in the fields of electric vehicles, data centers, and solar and wind energy. From a numerical point of view, the planned annual production capacity of industrial semiconductors will be able to meet the needs of a solar system with a total power generation of about 1,500 TWh, which is about three times the annual electricity consumption in Germany.

Dr. Sabine Herlitschka, CEO of Infineon Technologies Austria, said: "This investment shows that Europe has the ability to become an attractive production base in the highly competitive microelectronics field. Through this investment, we have also established A new benchmark. The high-efficiency chips produced by the new plant in Villach will become the core force in promoting the energy transition. Through the new plant, Infineon is working towards the realization of the goals of the European Green Deal and even the global Make an active contribution to the development of low-carbon and energy-saving."

Over the years, Infineon's products have been contributing to improving energy efficiency and even climate protection. As the core of Infineon’s global power semiconductor expertise, the Villach plant plays an important role in these solutions. These energy-efficient chips can intelligently control the power switch, which can significantly reduce the energy consumption of many applications such as household appliances, LED lighting equipment and mobile devices, thereby minimizing carbon emissions. For example, modern semiconductor devices can reduce the energy consumption of refrigerators by 40% and the energy consumption of architectural lighting by 25%. Thanks to the product portfolio of the Villach plant, the products produced by the new production facility can reduce more than 13 million tons of carbon dioxide emissions. This is equivalent to the amount of carbon dioxide produced by more than 20 million inhabitants in Europe.

Infineon has set a "binding emission reduction target" in 2020, and Infineon has also become the first semiconductor company to commit to achieving "carbon neutrality". Its goal is to reduce carbon dioxide emissions by 70% by 2025 compared with 2019; and by 2030 to achieve carbon neutrality.

During the construction of the Villach plant, Infineon also paid special attention to further improving energy usage: intelligent recycling of waste heat through the cooling system can meet 80% of the plant's heating needs and reduce carbon dioxide emissions by approximately 20,000 tons per year. In addition, the extensive use of exhaust gas purification systems makes direct emissions almost zero.

Another important milestone in sustainable production and circular economy is the production and recovery of green hydrogen. Starting in early 2022, the hydrogen required in the production process will be produced directly at the Villach plant using renewable energy, thereby eliminating carbon dioxide emissions in the original production and transportation links. Green hydrogen will be recycled after it is used in chip production to provide power for buses. This dual-use green hydrogen project is unique in Europe. Through these measures, Villach's new plant is playing an important role in vigorously promoting Infineon's goal of carbon neutrality by 2030.

The total area of the new factory is about 60,000 square meters, and the production capacity will be gradually increased in the next 4 to 5 years. Two-thirds of the 400 highly qualified professionals required for the operation of the factory have already arrived.

The factory is one of the most modern chip factories in the world, relying on full automation and digitalization, which is what Infineon has been striving for. As a "learning factory", artificial intelligence solutions will be widely used for predictive maintenance. Networked factories will be able to predict in advance when maintenance is required based on a large amount of data analysis and simulation. The factory's automated transportation system is 6 kilometers long, and manual wafer transportation will no longer be used.

Jochen Hanebeck, member of the management board and chief operating officer of Infineon Technologies AG, said: “Infineon now has two large 300mm thin wafer chip factories for the production of power semiconductor devices, one in Dresden and the other in Dresden. Located in Villach. The two factories are based on the same standardized production and digital concepts, allowing us to control the production and operation of the two factories like a factory, which not only further increases production capacity, but also provides customers with greater flexibility This is because we can quickly adjust the output of different products between the two factories, so as to respond to customer needs more quickly. The two factories are essentially "combined" into the same giant virtual factory, becoming Infineon’s The new benchmark set in the 300mm manufacturing field can further improve the efficiency of resource and energy use and optimize the environmental footprint.

The chips are manufactured on 300mm thin wafers, and the thickness of the thin wafers is only 40 microns, which is thinner than a human hair. Villach is the professional core of Infineon's power semiconductors, and has long been a very important and innovative base in the company's manufacturing network. About ten years ago, Infineon successfully developed the technology to produce power semiconductors on 300mm thin wafers here, and in recent years it has achieved fully automated mass production at its Dresden plant. Due to the large wafer diameter, the use of this technology brings significant productivity advantages and reduces capital expenditures.

"Infineon occupies 15% to 20% of the market share in the field of power semiconductors, and has such a leading position. For us, the most important thing, and the most exciting and exciting thing for us, is that we can find the right place here. The establishment of a new 300mm fab is a manifestation of our pioneering spirit." CEO Dr. Reinhard Ploss concluded.