Because Bluetooth headsets get rid of the shackles of wires, they are more popular in the sports field.

It is inevitable for people to sweat during exercise. Based on this, sports earphones are more or less waterproof in structure. However, the compactness of the earphone structure limits the size of the sealing ring, and the usual bumps, temperature changes, and sweat corrosion cause the sealing structure to fail, which causes the earphone motherboard to function abnormally.

When the industry headset manufacturers do product reliability testing, the relatively strict method is to use the whole machine to soak in sweat. But this kind of test cannot fully reflect the real usage, so even if the reliability of the preliminary evaluation is passed, there will be a high defect rate after being put into the market. The main reasons are as follows:

The artificial sweat used in the immersion test environment is in liquid form, while the sweat of the human body will exist in gaseous form during sweat or sweat drying. Most of the sweat is water, and there is a strong surface tension between the liquid water molecules, and the molecules pull each other to form a long chain structure, so it is difficult to penetrate the inside of the earphone. However, in the real use environment, the surrounding temperature is relatively high when people sweat, and most of the sweat is in the form of steam (sweat evaporates in a natural environment and is also gaseous). Since there is no surface tension between gaseous molecules, they all exist in the form of single molecules. The diameter of water molecules is very small, and it is difficult for general structural protection to completely isolate them. This is also the reason why Bluetooth headset motherboards often suffer from corrosion failure.

3. During the use of the Bluetooth headset, there may be external pulling (mostly in the noodle-type headset), bumping, and squeezing caused by sealing failure. This situation is not all visible to the naked eye, so the risk of corrosion is greater.

In response to the above problems, many brand manufacturers with higher quality requirements have made quite a few attempts, including glue, nano-hydrophobic, and Parylene nano-water barrier technology. Below we analyze the protection of Apple Airpods by disassembling.

After heating, use a professional tool to open it, and you will find that the joint seam of the headset and the bottom charging port are sealed with a thick layer of glue. The red part in the picture shows that the glue is stretched when it is disassembled.

The soft-hard combination board used in the earphone, from the red frame of the soft board, it can be clearly seen that there is a layer of white film wrapped on the entire board.

After analysis, the film layer is a Parylene film nano film layer. The film has excellent anti-acid, anti-alkali and anti-sweat functions. The main function of being used on the earphone motherboard is to prevent the sweat from entering during the wearing process and causing the circuit board to corrode. 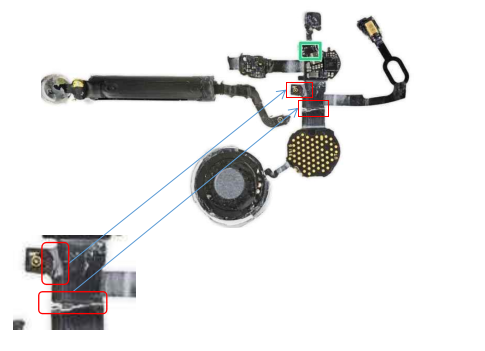 Due to the small size of the Bluetooth headset board, high component density, and relatively large production capacity, the application of Parylene coating technology in this industry has a high technical threshold.

It can be seen from the details of the circuit board in the picture that the masking area is unconventional and the film breaks are also very regular, and there is no obvious trace of pulling. It should be masking and defilming in an automated way.

Because the Bluetooth headset board requires very high masking accuracy, the realization of process automation requires a comprehensive consideration from materials to customized equipment. At present, most Parylene coating companies do not have mature solutions.

Xia Yu Nano Technology (Shenzhen) Co., Ltd. is a company that focuses on the overall solution of Parylene nano-protection. After several years of intensive cultivation, the company's technical team has developed a complete set of automation solutions, focusing on high-level protection of Bluetooth headsets. The bare board of the Bluetooth headset that has been nano-protected can pass the 24-hour artificial sweat immersion test in the working state. 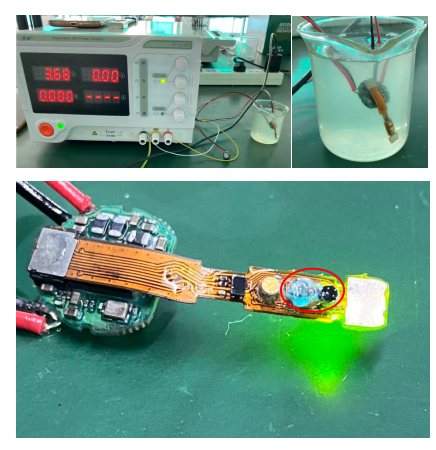 Because the traditional three-proof technology has relatively poor anti-perspiration effect, and its thickness is several hundred microns, it will affect the product assembly, and the environmental protection requirements are getting higher and higher, so the application in the industry is subject to certain restrictions. The Parylene nano film coating has excellent sweat corrosion resistance, the film thickness is very thin, and it can achieve 360-degree protection without dead angles in an environment with dense components, so it is recognized and widely used by brand customers. With the trend toward miniaturization and integration of earphones getting higher and higher, customers' requirements for protection are becoming more and more demanding, and the application of Parylene nano-protection technology will become wider and wider.