Home > Blogs > The role of silicon carbide in the next generation of industrial motor drives.

The role of silicon carbide in the next generation of industrial motor drives.

The International Energy Agency (IEA) estimates that motor power consumption accounts for more than 45% of the world's total electricity. Therefore, finding a way to maximize the energy efficiency of its operation is crucial. More energy-efficient drives can be smaller and closer to the motor, reducing the challenge of long cables. From the perspective of overall cost and continued reliability, this will have practical significance. The emergence of wide bandgap (WBG) semiconductor technology is expected to play an important role in achieving new benchmarks for motor energy efficiency and form factors.

Using WBG materials such as silicon carbide (SiC) can produce similar products that exceed silicon (Si) in performance. Although there are various important opportunities to use this technology, industrial motor drives are gaining the greatest interest and attention.

The high electron mobility of SiC enables it to support faster switching speeds. These faster switching speeds mean that the corresponding switching losses will also be reduced. Its dielectric breakdown field strength is almost an order of magnitude higher than that of silicon. This enables a thinner drift layer, which translates to a lower on-resistance value. In addition, since the thermal conductivity of SiC is three times that of Si, it is much more efficient in terms of heat dissipation. Therefore, it is easier to reduce thermal stress.

Traditional high-voltage motor drivers will use three-phase inverters, in which Si IGBTs integrate anti-parallel diodes. The three half-bridge phases drive the corresponding phase coils of the inverter to provide a sinusoidal current waveform, which then runs the motor. The energy wasted in the inverter will come from two main sources-conduction loss and switching loss. Using SiC-based switches instead of Si-based switches can reduce these two losses. 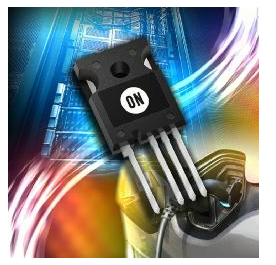 Therefore, if you want to improve drive efficiency and extend the working life of the system, it is obviously advantageous to migrate to SiC Schottky. So how can we take a further plan? If SiC MOSFET is used to replace the IGBT responsible for the actual switching function, the improvement in energy efficiency will be more significant. Under the same operating conditions, the switching loss of the SiC MOSFET is five times lower than that of the silicon-based IGBT, and the conduction loss can be reduced by as much as half.

Other related benefits of the WBG solution include substantial space savings. The excellent thermal conductivity provided by SiC means that the required heat sink size will be greatly reduced. Using a smaller motor driver, engineers can install it directly on the motor housing. This will reduce the number of cables required.

ON Semiconductor now provides engineers with IGBTs co-packaged with SiC diodes. In addition, we also have SiC MOSFETs rated at 650 V, 900 V and 1200 V. Using such a product, it will be possible to change the motor drive, improve energy efficiency parameters, and make implementation more streamlined.