The term ultra-high image quality has been continuously used in recent years, and the reason is nothing more than the rising demand of consumers for the clarity of digital audio and video. The advent of the era of ultra-high image quality means that in addition to the continuous growth of data volume, it also means that consumers' requirements for storage efficiency and speed are also constantly improving. Phison Electronics (Phison; 8299TT), as a leading manufacturer of NAND control chips, today (2021/2/24) released the world's first SDExpress memory card supporting PCIe interface, which is expected to meet the needs of the high-speed data transmission audio-visual equipment market. . Phison's SDExpressCard (SD7.0) solution is expected to start mass production in March.

The world’s first SDExpress memory card equipped with Phison’s PS5017 controller chip not only supports the SD7.0 specification and the technical specifications compatible with PCIeNVMe, but is also compatible with all current built-in SD card slots, allowing users to connect with the latest SDExpress memory cards Technology seamlessly integrates and changes. Furthermore, Phison’s SDExpress memory card has a performance speed of 870MB/s, which is three times the performance of a traditional UHS-II SD card, with a maximum capacity of 512GB. It is a content creator (ContentCreator), high-end audio-visual system, and even edge computing equipment. A great boon for the high-quality audio-visual application market. 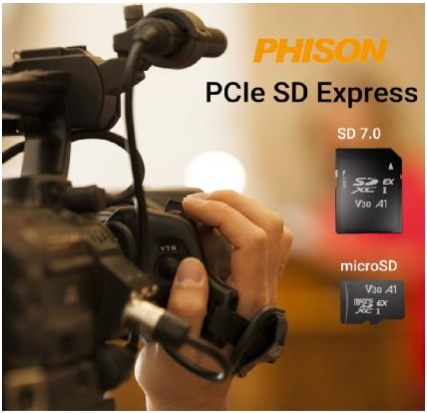 Pan Jiancheng, chairman of Phison, said that the application of SD cards and microSD cards in the consumer market has gradually been saturated, but markets such as industrial applications, digital surveillance, medical equipment, embedded systems, and content creators are booming. There is a huge difference between these storage application markets and traditional consumer markets. Products often require customized functions or firmware optimization for user behavior. And this kind of customized demand is precisely the strength of Phison.

Phison Technology Chief Ma Zhongxun then emphasized that the development process of the SDExpress card released this time is actually quite difficult, because the small size of SD cards and microSD memory cards causes poor heat dissipation efficiency in the case of high-speed data transmission. There will be overheating. However, Phison's exclusive thermal protection mechanism (ThermalProtecTIonMechanism) not only allows SDExpress memory cards to play their due performance and speed, but also takes into account heat dissipation efficiency, which is very suitable for various high-speed mobile storage applications.