Home > Memory News > It is said that samsung, SK hynix will be huawei stable supply?

It is said that samsung, SK hynix will be huawei stable supply?

However, this rumor was quickly refuted and SK hynix reached out to Aspencore's international electronic business news on Monday (May 25), stating that "the reports quoted by bloomberg are not true," without elaborating on the details.

A samsung spokesman later denied the news, saying "no such meeting has been held." 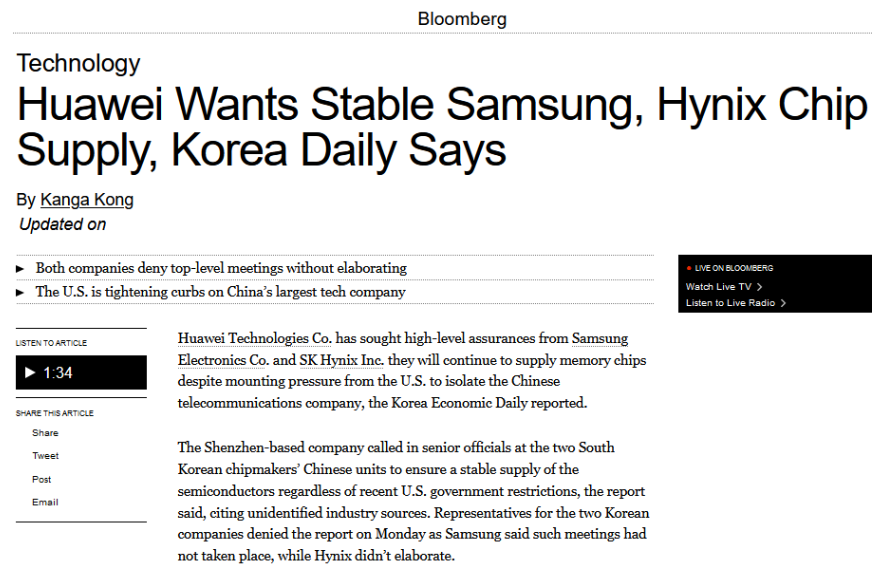 As the two south Korean companies account for more than 70 percent of the global memory chip market, huawei is also one of the top five customers of samsung and SK hynix, respectively, where it spends about 10 trillion won ($8.1 billion) a year on DRAM and NAND flash memory chips, bloomberg said.

Report points out that although the memory chip maker is not limited to the new rules, but with the two south Korean companies account for the global memory chip market has a pivotal position, so huawei worry about government trump follow-up may increase limits, thus increase the memory chip inventory measures should be taken, for a rainy day

Some analysts have argued that the new rules issued by the U.S. Commerce Department give priority to south Korean manufacturers because samsung and SK hynix both use U.S. technology in chip production, but their chips are of their own design or won't be directly affected by U.S. restrictions.

However, analysts also said an escalating trade war with the us would hurt demand for phones and components from companies such as huawei and apple.Park sung-soon, an analyst at Cape Investment & Securities, agrees that this is bad news in the long run, as restrictions will reduce demand for huawei's handset components

CXMT memory, the first DRAM supplier on the Chinese mainland, started low-volume production of DRAM chips in the fourth quarter of 2019, according to a recent report by market research firm IC Insights.

IC Insights believes that given the low starting point of IC manufacturing and technology in mainland China, the increasing difficulty in purchasing advanced semiconductor manufacturing equipment will pose a challenge to the mainland's self-sufficiency in chip demand in the coming years