Home > Industry News > Discussion on the future of energy

Discussion on the future of energy

Renewables, energy storage and grids are part of the future equation, with green energy replacing aging electricity infrastructure across the globe. Panel discussions at PowerUP Expo are designed to address this very important and equally broad topic with the help of renowned experts in the power industry.

Maurizio Di Paolo Emilio, Editor-in-Chief of Power Electronics News, gave a brief introduction to the panelists and set the course for the discussion on the future of energy.

Steve Lambouses, vice president of high-voltage power at Texas Instruments (TI), kicked off the discussion by acknowledging that wide-bandgap (WBG) materials such as silicon carbide (SiC) and gallium nitride (GaN) are driving higher levels of power efficiency and density. He further noted that while there is a lot of information about the role these WBG materials play in vehicle electrification, this is not the case when it comes to smart grid design.

Another important issue raised in this panel discussion is monitoring power in high voltage transmission lines. Conor Power, director of green energy solutions at Analog Devices, points out that protection relays are often battery- or line-powered and trip a circuit breaker if the power gets too high. This puts more pressure on the power budget.

"Power monitoring systems are often forgotten," Ball said. "But now, grid operators are starting to use inertial measurement devices." They are used to check how the opening and closing of circuit breakers measure low- and high-level vibration signals. This enables smart grid operators to predict in advance whether the signal will change and thus intervene in such situations.

Peter Friedrichs, Senior Director SiC at Infineon Technologies, took the discussion to the next level by introducing a bidirectional energy flow that includes data communication and security functions. As the voltage rises to 1500 V, new power topologies will inevitably come into play. According to Friedrich, power electronics will include a balanced mix of silicon and silicon carbide components.

Next, Di Paolo Emilio asked Milan Rosina, principal analyst for power electronics and batteries at Yole Dé Developmentment, about renewables beyond solar and wind. Here, Rosina mentions biomass, hydropower, and energy turbines that run on the power of the ocean. For biomass, he outlines environmental and ethical issues.

When it comes to hydropower, while the most efficient power stations have been built, wind turbines that harness ocean currents have strong potential, at least on paper. However, challenges remain due to corrosion as well as installation and safety concerns. Therefore, Rosina believes that photovoltaic and wind energy have higher potential.

Next, it's time to talk about the digital management of distributed energy, and here Di Paolo Emilio invited Shuli Goodman to join the discussion. Goodman is the executive director of LF Energy, an open source foundation focused on the power systems space. Goodman started talking about the incredible transformation happening in the power industry, including the shift from centralized to distributed grids.

In terms of renewable energy, we're less than 10 percent in the U.S., he said. Furthermore, grid operators are nowhere near capacity in terms of resources. According to Goodman, this requires a new digitally native paradigm and understanding of power systems. This means that electricity sector regulators should have a basic understanding of the digital environment.

Second round of group discussions

Di Paolo Emilio started the second round with a more focused discussion on the high-voltage designs and multi-stage topologies that these power systems will accompany. For example, how do we move to faster switching based on SiC and GaN semiconductors? Here, TI's Lambouses talks about power shutdowns and the challenges of moving energy in and out of the grid.

Next, Di Giovanni of STMicroelectronics explained the advantages of SiC for DC/DC conversion at higher voltages, where silicon MOSFETs exhibit high R DS and silicon IGBTs are only feasible at lower frequencies. He also explained why we need synchronous rectification.

Speaking for the second time, ADI's Power emphasized the need for more accurate battery management. First, the voltage of each cell must be accurately measured. Additionally, system temperature fluctuations across the battery pack must be closely monitored and corrected. Another factor that makes battery management a challenge is cell balancing: engineers need to accurately balance each cell in a serial system. 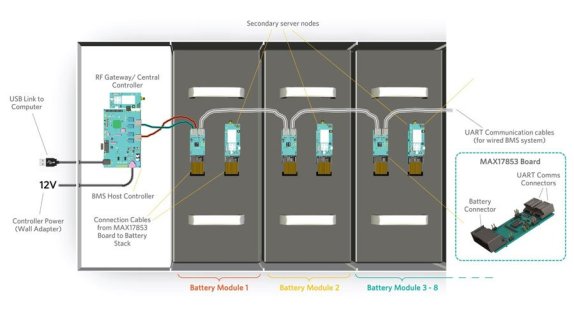 Infineon's Friedrichs elaborates on the need to integrate storage into the smart grid and how it will improve energy efficiency by delivering electricity when and where it is needed most. He also explained the need for communication and security elements in this storage-enabled energy management system.

LF Energy's Goodman is again focusing on the political and socioeconomic aspects of the new energy framework, this time talking about open source tools for creating new grids. As anecdotal evidence, he talks about the evolution of mobile phones from the big, expensive boxes of the late 1980s to the smart smartphones of today. "Fundamentally, it's an economic equation," he said.

Yole's Rosina, a finalist in the second round, drew attention to grid operators' inertia in embracing local DERs. Therefore, he concluded that the most feasible way to implement a smart grid is through stationary batteries.

At the end of this panel discussion, Di Paolo Emilio thanked all participants for their valuable perspectives on the future of energy. He then invited Bolaji Ojo, former global co-editor of AspenCore Media, to make a concluding remark.