Home > Industry News > SMIC officially listed on the Science and Technology Innovation Board.

SMIC officially listed on the Science and Technology Innovation Board. 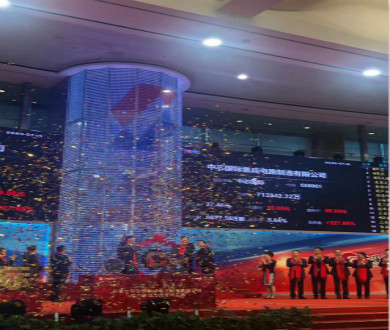 SMIC's application for listing on the Science and Technology Board was accepted on June 1st, passed on June 19th, and approved for registration on June 29th. On July 5, SMIC's initial public offering and listing announcement on the Science and Technology Board disclosed that there were a total of 29 IPO strategic placement targets, with a total placement amount of 24.261 billion yuan. Then on July 16, the stock was officially listed, and SMIC completed the breakthrough of the science and technology board in only one and a half months, setting a record for the fastest listing of A shares.

SMIC was established in April 2000. Its main business is integrated circuit wafer foundry and supporting services. It is currently the largest wafer foundry with the most advanced technology in China. In fact, SMIC listed on both Hong Kong stocks and US stocks as early as 2004. After returning from US stocks last year, it returned to the A-share market for science and technology.

From the perspective of process, TSMC has achieved 5nm this year, and 5nm has begun mass production. It is reported that it has received some 5nm orders from Huawei and Apple's 5nm orders. TSMC's 5nm process technology represents the highest level in the industry.

According to the analysis, SMIC has lagged behind TSMC by about 4 years in terms of technology.

In terms of revenue, public information shows that TSMC achieved revenue of US$35.7 billion in 2019 and a net profit of US$11.5 billion, while SMIC

This shows that there is still a certain gap between SMIC and TSMC in all aspects.

Not only that, Bernstein's data shows that up to 20% of SMIC's sales come from HiSilicon. It also relies on applied materials companies (Applied Materials), LAMResearch, KLA, ASML, and other equipment from the United States or its allies, which have no Chinese alternatives.

Bernstein analyst Mark Lee said: "Without these tools, it is almost impossible to advance production commercially. SMIC may be trapped in the 14-nanometer technology field, and if there is not sufficient capital support, they cannot transition To the 7-nanometer process."

However, Goldman Sachs expects SMIC to upgrade to the 7nm process in 2022 and the 5nm process in the second half of 2024, and its gross profit margin will rise to more than 30% in 2025.

In this shock to A shares, SMIC's board of directors believes that listing on the domestic market will allow the company to enter the Chinese capital market through equity financing, maintain the company's international development strategy and improve the company's capital structure.

The entry of more capital will also help it invest in more advanced process technology development.

A total of 29 strategic investors participated in the placement of SMIC this time. Including 9 national-level companies or funds such as the National IC Industry Fund, 4 Shanghai local state-owned assets including the Shanghai IC Industry Investment Fund, and 2 overseas sovereign funds. At the same time, 13 A-share listed companies indirectly subscribed to SMIC, including China Microelectronics, Shanghai Xinyang, Zhonghuan shares, Weir shares, Lanqi technology, Huiding technology and so on.

40% of the funds raised by the SMIC Science and Technology Board will be used for the 12-inch chip SN1 project, 20% of the funds will be used as reserve funds for the company's advanced and mature process research and development projects, and the remaining 40% will be used as supplementary working capital. Among them, the SN1 project is the SMIC Southern fab built in Shanghai, which mainly produces advanced processes of 14nm and below, with a total investment of 9.059 billion US dollars, of which production equipment purchase and installation costs amounted to 73.316 million US dollars.