India plans to impose higher trade barriers and import tariffs on about 300 products in an attempt to create tariff protection for domestic companies, officials said on Thursday, Reuters reported. 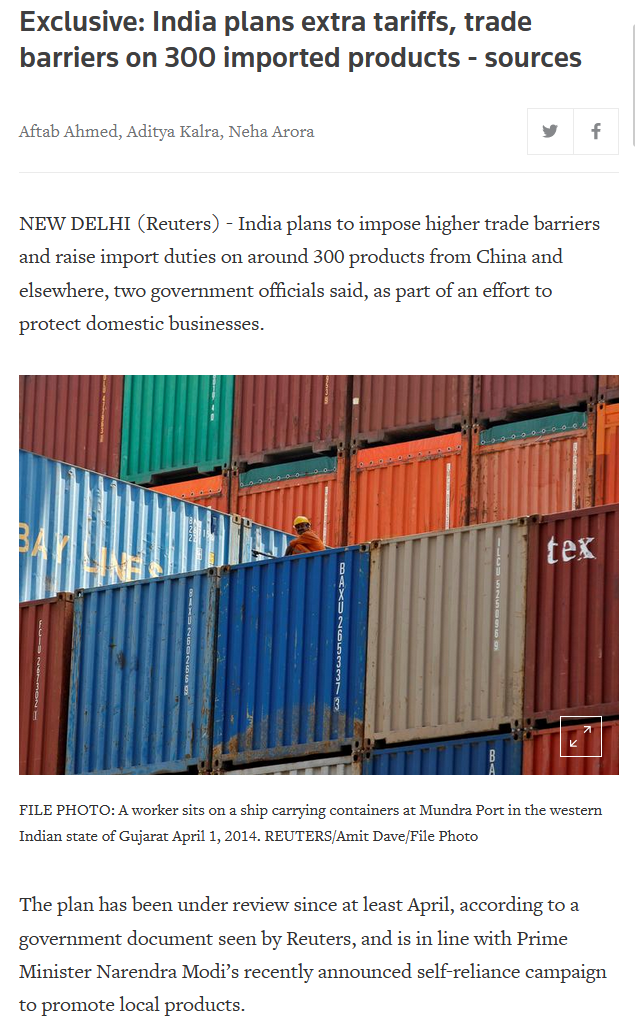 The plan has been under review since at least April, according to a government document, the report said.The plan, which fits into Prime Minister Narendra Modi's "self-reliance" campaign, aims to further promote the "Make in India" initiative by protecting local companies from competition from imports.

Indian officials said the government was considering raising import tariffs on 160-200 products and imposing non-tariff barriers, such as licensing requirements or stricter quality checks, on another 100, the report said.

Officials with direct knowledge of the plan said the decision would target imports worth between $8 billion and $10 billion, with the aim of preventing imports of non-essential, low-quality products that make Indian products uncompetitive.

"We are not targeting any country, but this is one way to reduce unbalanced trade deficits with countries like China," the second official said.

In the fiscal year ending March 2019, bilateral trade was $88 billion and the trade deficit with China was $53.5 billion, making it India's largest trade deficit country.

According to the latest available data, India's trade deficit with China was $46.8 billion between April 2019 and February 2020.

An industry source familiar with the matter said engineering products, electronics and some medical equipment were among the projects under consideration.As for non-tariff barriers, such as stricter quality control certification, they may apply to imported products such as air conditioners.

We are pushing a policy to strengthen Manufacturing in India, taking into account its strengths and weaknesses, "said another Indian official.

Indian ministries have solicited feedback on a list of about 300 products, the report said, adding that India has raised tariffs on more than 3,600 items since 2014, covering products in sectors such as textiles and electronics.

Since taking office in 2014, Mr Modi has promised to promote and protect the country's manufacturing sector from competition from imports.In recent years, in addition to the "Make in India" initiative, the "Make India" campaign was announced in May this year.

India had already raised import tariffs on goods such as electronics, toys and furniture in February, a decision that drew widespread criticism at the time as a protectionist move against foreign companies.At the time, IKEA of Sweden said it was disappointed by the higher tariffs.