The us government is in talks with a group of semiconductor manufacturers to build factories in the us on Sunday, the Wall Street journal reported 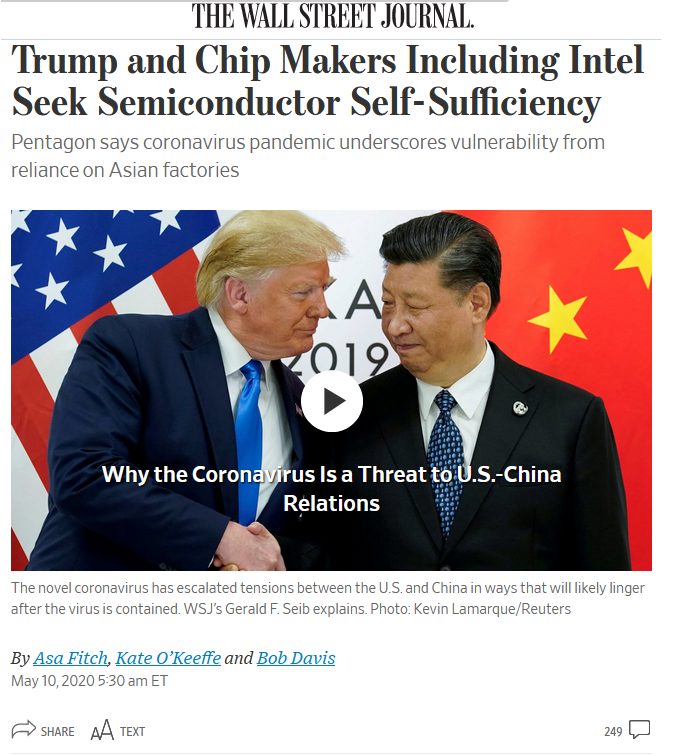 So far, the U.S. government has held talks with TSMC and Intel, the sources said.U.S. officials are trying again to persuade companies to shift some production to the U.S. in an effort to get out of the continuing vulnerability of the U.S. to the Asian semiconductor supply chain during the covid-19 outbreak

It is understood that the us government is in talks with Intel and TSMC about building new factories in the us.Talks with Intel, which already makes some of its chips in the u.s., are focused on persuading the company to expand U.S. production, while TSMC is expected to build its first U.S. chip plant.

In fact, it was reported earlier this year that the Commerce Department, the defense department and apple, its largest customer, had been in talks with TSMC about building a factory in the United States, but TSMC's response in mid-january was not a direct yes or no.

"The company has never ruled out the possibility of setting up a factory in the United States," said liu deyin, TSMC's chief executive, on Tuesday. "we just don't have a specific plan at the moment."For now, the lowest cost of production is in Taiwan, so if there are plans to set up a factory in the future, priority should still be given to Taiwan," Mr Liu added.

It is reported that at present, the world has the latest semiconductor manufacturing process technology of three manufacturers - TSMC, Intel, samsung electronics are the United States "set up plants in the United States" "target."

Foreign media reports also pointed out that samsung currently has a chip factory in Austin, Texas, so some U.S. officials also hope that samsung can expand its chip manufacturing business in the United States.

However, the source did not give further details of any incentives offered by the U.S. government to lure the semiconductor makers to build plants in the United States.

TSMC, apple, Intel and samsung have not commented on the news.

It is understood that TSMC is the world's largest wafer contract manufacturer, but there is no room for the us to "have a hand" in its production in Taiwan. Therefore, US President Donald trump has been hoping that TSMC can set up a factory in the us

But setting up a factory in the U.S. was never going to be easy, and TSMC has yet to make a final decision.TSMC said in April that it was actively evaluating all suitable sites, such as the U.S., but had no specific plans and was still in the early stages of evaluation."We are still in the evaluation stage and will take into consideration factors including economy, supply chain, personnel and cost," said liu deyin, chief executive of TSMC. "but there is no specific plan."