According to the information, on April 3, 2018, Hua Hong Group announced the start of the Hua Hong Semiconductor No. 7 Plant in Wuxi. It is understood that Huahong Wuxi IC R&D and manufacturing base project covers an area of about 700 mu, with a total investment of 10 billion US dollars. The total investment of the first phase project is about 2.5 billion US dollars. A new process grade of 90-65 nm and a monthly production capacity of about 40,000 pieces are built. The 12-inch specialty process IC production line supports applications in emerging areas such as 5G and the Internet of Things.

The Huahong Wuxi Base Project will build several 12-inch integrated circuit production lines in phases. After the implementation of the first phase of the project, the construction of the second production line will be started in due course.

The first phase of Huahong Semiconductor (Wuxi) Co., Ltd. plans to complete the civil construction in the first half of 2019. In the second half of the year, the construction of the purification plant and the installation of power and electromechanical equipment will be completed and the production will be gradually realized. The annual output value is expected to reach 5 billion yuan. .

After a year of construction, Huahong previously announced that Huaxi 7th Plant in Wuxi will move into the equipment in the second quarter. It is expected to start mass production of 12-inch wafers in the fourth quarter. The research and development, engineering and sales teams of Huahong are working for This is prepared.

Recently, the Huahong Wuxi project entered a new stage. On June 6, the first batch of lithography machine moving into the 2-inch production line construction project was held. This marked a new step in the construction of the Huahong Seven Factory and was completed in September. Laid a solid foundation. 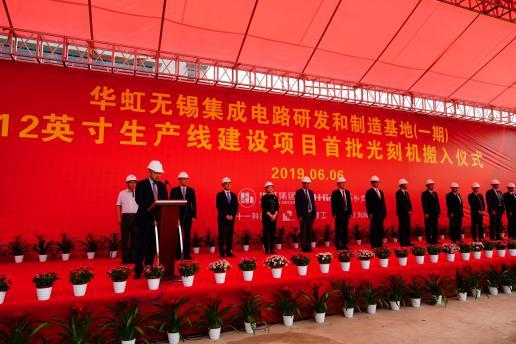 At 9:30 am, the lithography machine moving in ceremony officially began. Hua Honghong Party Secretary, President, General Manager Tang Junjun of Hua Hong Semiconductor (Wuxi) Co., Ltd. presided over the ceremony, Zhao Zhenyuan, Secretary of the General Party of the 11th Science and Technology Party Committee, and Chairman of the Board of Directors and President of Shanghai Construction Engineering Group, Qi Jiajun, and equipment The representative of the supplier, Bert Savonije, senior vice president of ASML, speaks separately.